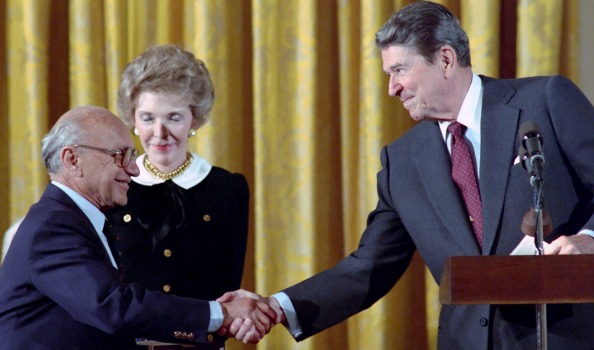 Universal Basic Income (UBI) is a welfare scheme in which all adult citizens receive a regular cash payment regardless of employment status. At first glance, it is easy to see why those self-professed bastions of American freedom – libertarians – oppose this measure so vociferously. Right-libertarians see UBI as overly generous to unemployed, able-bodied people (so called “lazy people”), and also as implying redistribution on a large scale, which conservatives see as a radical expansion of the welfare state. But the impression that UBI is exclusively leftist is a misguided one.

There is a strong right wing libertarian case for UBI. In fact, UBI may very well be one of the best means to promote those basic freedoms and rights that libertarians hold so dear. And yes! This does include their undying faith in the free market. Right-libertarians often pride themselves on how open minded and non-dogmatic they are in comparison to the left. In this case, however, the dogma of libertarians has obscured an essential truth: UBI is as libertarian as you get.

For inspiration on this issue, libertarians must look no further than their great champion: Milton Friedman. Friedman, indeed, that doyen of anti-socialist and libertarian thought, was vehemently in favour of UBI, particularly in his book Capitalism and Freedom (1962). To be precise, Milton Friedman supported Negative Income Tax (NIT), not UBI. But NIT is an extremely close variant of UBI. NIT also provides benefits “below which no man’s income could fall” – a universal baseline of income. Friedman may as well have been directly advocating for UBI, since UBI with a flat tax rate is equivalent to a negative income tax. Is it time that the American right wing abandon Milton Friedman as their idol for being secretly liberal? Libertarians must grow up, or else renounce their libertarian identity and intellectual champions.

UBI is the welfare programme most suited to libertarian tastes. Libertarians like Friedman are not inherently against combating poverty. Nor are they completely indifferent to it. They are very critical, however, of what they perceive as ineffective and redundant welfare programs. UBI should appear more attractive to libertarians than conventional welfare programs.  Such collectivist programs as old-age benefits, minimum-wage laws, and pro-union membership from the libertarian perspective seek to improve the conditions of particularly occupational or societal groups as proxies for the poor. By contrast, UBI is far more efficient and directly helps the poor rather than some occupational group which is just likely to be poor.

But shouldn’t libertarians push back against measures like UBI that fund “lazy people”? Surprise–there is nothing within the libertarian doctrine that actually requires libertarians to be miserly. It is true that, as with almost all remedies to poverty, UBI reduces the incentives of the unemployed to help themselves. But so what? So what if there are some so-called “lazy people” who benefit from UBI without being productive? Fiscal conservatives may wish for a redistribution scheme that closely monitors aid recipients and limits aid to those motivated. But, as Friedman once answered, smiling, in a 1968 interview, measures to check on whether that aid is spent wisely by the poor are unnecessary and ineffective. If libertarians are all about streamlining welfare, UBI should easily appear to be the better option:

“You and I understand the free market…Let us not underestimate the ingenuity of the poor people in converting what they get from the relief worker to what they want. And that’s just wasteful. They would be far better off if we just gave them the money and let them spend it.”

Friedman’s point here is clear. No form of welfare is bullet-proof against the possibility of funding “lazy people.” To reject all forms of welfare on the basis of this perennial concern would be self-defeating to the libertarian goal of making sure that all people, despite unfortunate circumstances, possess the right to participate in the voluntary transactions of the free market.

UBI is also the libertarian’s wet dream as it is a fundamentally anti-paternalistic measure. Certainly, the government is the primary supplier and distributor of UBI. Nevertheless, the UBI is not means tested and is therefore perfectly in line with libertarian values. UBI does not impose on individuals the government’s expectations on how they should spend the payment. It omits any insinuations of the government’s preferences. Whether someone donates their entire share of UBI to charity or spends it on their video game addiction, the government remains silent and unresponsive. UBI is therefore handled impersonally by the government. The state only supplies UBI. This “impersonality” is very similar to that of the free market, a reason cited by Friedman for the free market avoiding the need for a governing authority. Thus much like the free market, UBI gives people what they want instead of imposing on the poor the values of an external group.

Contemporary “libertarians” in the U.S. have too often cherry picked the boundaries of freedom. They lavishly flaunt freedom as a basis for demanding rights to inflammatory speech or guns, and yet they are entirely thoughtless and demagogic in their approach to these freedoms. When libertarians see the possibility of these same freedoms being extended to people or ideas they instinctively think are undesirable, they have been too willing to declare that only theirfreedoms are valid. The lack of right wing support for UBI is one of many manifestations of this pattern. Many self-claimed “libertarians” fail to realize that UBI actually supports libertarian values because of their oversimplified preconceptions about welfare, freedom, and the free market.