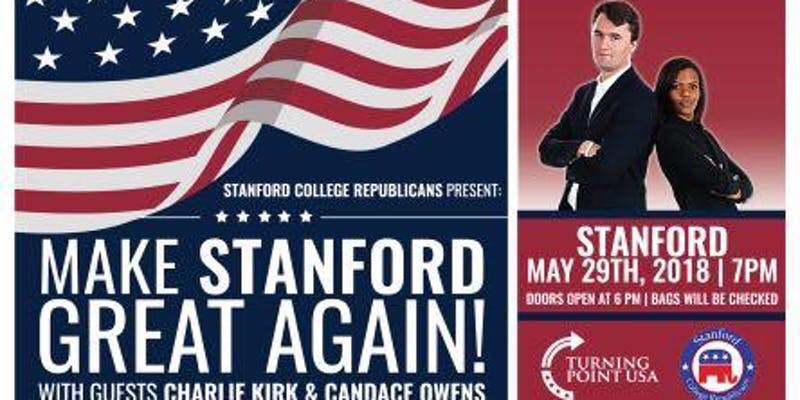 Certain ticket reservations for the Stanford College Republicans’ recently announced event with controversial conservative group Turning Point USA have been deleted and cancelled, with the cancelled reservations possibly having been targeted in a manner in violation of SAL event policy.

On Monday evening at approximately 4:30 PM, the Stanford College Republicans announced what would be their “grand finale event of the year”: an event in partnership with Charlie Kirk and Candace Owens of TPUSA, the group of college conservatives known for their role in influencing college elections and, in Owens’ case, Kanye West.

The event, announced under the title “Make Stanford Great Again,” is to be held in Tresidder Union’s Oak Lounge on Tuesday May 29 at 7 PM, according to its listing on online ticketing platform Eventbrite, where the event’s free tickets are distributed.

Tickets for the event sold out quickly, with the Stanford Affiliate option on the site, which allowed for the reservation of up to 10 free tickets on initial posting, unavailable after roughly 6:15 on Monday. Certain students reportedly bulk acquired tickets. By Tuesday afternoon, though, tickets for Stanford Affiliates were available again, though only in increments of one at a time.

Additionally, a number of people who reserved tickets on Monday evening, including multiple Sphere writers, were no longer able to access their tickets as of Tuesday afternoon. While print tickets ordered on Monday evening are still available as PDF attachments to Eventbrite confirmation emails, attempts to access them through the Eventbrite website or through links on the confirmation email resulted in the user being redirected to a page that simply read “No tickets were found for this order.” For some writers, tickets were cancelled even after re-reserving on Tuesday afternoon.

The cancellation of ticket orders may be more than just a bureaucratic error, though, with evidence pointing to a targeted series of cancellations. An anonymous source who shares a class with Stanford College Republicans President John David Rice Cameron informed the Sphere that, around 2:30 PM today, they witnessed Rice-Cameron delete several ticket reservation entries on the event’s Eventbrite page during a break in class.

Throughout the rest of the class period, our source also noticed Rice-Cameron switching between Facebook and Eventbrite repeatedly, viewing the profiles of a number of students including at least one member of the Asian American Students Association’s Core group, based on a Facebook cover photo. While our source was not able to see precisely what Rice-Cameron was doing on Facebook, the sequence of events suggests that Rice-Cameron was intentionally deleting the reservations of particular individuals on a targeted basis.

The Sphere also contacted Eventbrite, the event’s ticket distributor, about its policy on organizers cancelling tickets. Eventbrite responded that, in its capacity as an online ticketing tool, it did not have access to event information beyond the public event page used for registration, and that such concerns would be best resolved by communicating with the event organizer.

A policy of targeted deletion as such is in violation of Stanford Student and Activity Leadership (SAL) policy. According to SAL policy, “recognized student organizations are expected to […] ensure open and easy access to membership and their group’s activities.” Deliberately barring access to particular students directly goes against providing open access to group activities. In what is perhaps a note of irony, Stanford College Republicans have made part of their stated goal on this campus “guiding the campus conversation around political issues in a more balanced direction,” according to a story in the Stanford Daily from earlier this year. The Sphere has reached out to SAL to ask for comment.

The Sphere reached out to SCR leadership and received no response as of press time.

This story will be updated as the Sphere receives more information.

The article was amended to acknowledge that many students obtained large numbers of tickets to the event.