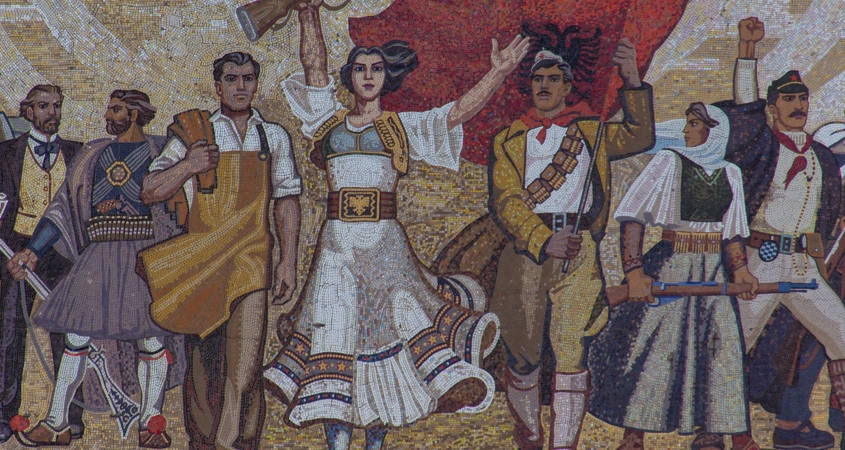 I often find myself in the company of utopians. The most common on campus are the social-justice types: history’s on our side, folks, and it’s coming to an end… It’s progressive Stanford, proud home of the pseudo-Hegelian, and while Hegel has no place in the histories they’ll write, they will follow him, misinterpreted, to the end of time. Naturally, this being Silicon Valley, you also meet the transhumanists—true believers not just in our world’s perfectibility, but in the perfectibility of the body, mind, and soul (in a purely scientific sense, of course). Then, near and dear to my heart, we have our communists and communistically-inclined, pinning their hopes on the distant Revolution and a new world order. There are many more such groups at Stanford, but you get the main idea: I’m surrounded by lovely, well-meaning Teleologists. And they’re from all over the ideological map.

In their academic shadow flies an equally diverse group—in self-conscious silence, uncomfortable with itself. We would call ourselves Utopiaphobes if we had to choose a name, and we don’t necessarily believe that the Teleologists are wrong. If anything, we fear them. We think they’re right, and we worry that history may indeed be drawing, dialectically or otherwise, to a perfect close. It’s utopia itself we fear, utopia in any form, and history’s concomitant end. It’s the idea that living in utopia would mean living in a world without struggle. But make no mistake: we don’t fear progress. We fear perfection.

In a long digression on “kitsch” and Soviet films in Milan Kundera’s The Unbearable Lightness of Being, Sabina gets it right:

‘The current conventional interpretation of [Soviet] films is this: that they showed the Communist ideal, whereas Communist reality was worse. Sabina always rebelled against that interpretation. Whenever she imagined the world of Soviet kitsch becoming a reality, she felt a shiver run down her back. She would unhesitatingly prefer life in a real Communist regime with all its persecution and meat queues. Life in the real Communist world was still livable. In the world of the Communist ideal made real, in that world of grinning idiots, she would have nothing to say, she would die of horror within a week.’

Freedom from material suffering’s all well and good, but what of heroes? What of bold and beautiful transgression? More to the point, you won the Revolution. Now what? To a certain extent, Milan and I have presented a caricature of the “Communist ideal.” There are few Teleologists, lefty or otherwise, who believe in the true perfectibility of social relations, the end of all interpersonal conflict. Many of those who do work toward utopia would be as horrified by Khruschevian govno-for-the-screen as I am. But they do believe in a future of lower stakes—a simpler, happier world, a world where moral choice is unbearably light and painfully easy. To me, that’s a world without meaning, meaning born of sacrifice. Meaning doesn’t come easy because it asks us for all we’ve got: giving the self, frail as it is, to another. And meaning is the one price I won’t pay for a world without suffering.

But you ask me: what kind of leftist struggles with utopia? A confused one, clearly, though I think there’s a way out of my confusion. We could reinvent utopia, not the ideal at history’s end, but the brave new world at its better beginning. I couldn’t take a utopia of moderate Humean virtue, a world where heart-borne conviction bows to bodily need, and I couldn’t live hooked up to a pleasure machine. But I could live in a utopia that gave us the freedom to feel and live passionately and become something more than human without signing up for “digital consciousness.” I’d rather keep my body and its imperfections and my fallen sinner’s soul and still make something beautiful. We have a choice between eliminating our humanity and succeeding in spite of it, between a world of perfect order and a world of imperfect art.

So I look to imperfect art for a solution, and if bad Soviet films and Kunderan kitsch hold the problem, maybe great films hold the answer. Take Paul Thomas Anderson’s Magnolia, three hours, God-knows-how-many arcs, and meaningful and markedly beautiful throughout. Magnolia tells the story of a single day in the San Fernando Valley through the eyes of human beings who intersect, or don’t, and have their whole lives laid bare (laden with meaning) in the space of the few minutes each one has. It’s about forgiveness, but my point here has less to do with forgiveness than the limitations of a form.

Filmmakers have stories to tell and too little time to tell them, and in telling a compelling story in under two hundred minutes, you can’t waste a shot on noise: distractions, wasted time, billboards, busywork. If you see an ad or paperwork in a great film, you know it has meaning—a point. In one of Magnolia’s many threads, Anderson shows a boy genius come of age in the commercial-choked space of a trivia show. But the commercials stay off-screen, and the inane world of game shows becomes (for twenty minutes, maybe less) profound. Profundity, when trivia shows in our world just exist to pass the time: Are You Smarter than a 5th Grader? doesn’t move us. It just is, loud, full of action and empty of life.

Magnolia’s world has flaws that are difficult to forgive, and there’s suffering in Magnolia that won’t have a place in our filmic utopia. But Magnolia elevates the ordinary, freed from noise. Its beauty lies in this elevation, and if we were to build a better utopia, it wouldn’t replace the ordinary with the extraordinary. It would frame it, strip it of waste, and treat the everyday with the weight it deserves. I don’t want to engineer the perfect human or the perfect society, but I would engineer a world with the freedom to live life as cinematic epic, passing “ordinary” days without all the nonsense—only meaning.

This world has buried the wasted jobs of the twenty-first century, the billions of hours wasted in consumption and distraction—the unyielding need to obliterate our truest selves on the alter of wage labor’s embittering unfulfillment. And unlike the Teleologists, I don’t have an answer to the final question. “I’m not ready,” says Peggy Lee, “for the final disappointment.” But I do believe in ideals, and if I were to embrace a utopia of any kind, it would be one of anti-kitsch, a utopia without needless material suffering, but with space for being fully human. Eliminate poverty, but don’t eliminate the possibility of sin. The perfectly imperfect utopia replaces material struggle with internal struggle. In other words, all physical needs are met and minimized so that we can begin living, and only living.

That utopia is well worth the fight. I’m willing to risk the flaws I love in this world to bring an end to material suffering, but we need to fight for a utopia that centers and celebrates the human experience. And the human experience is inherently flawed. Religious or not, we’re all fallen: it’s hard to be human, too hard for it all to mean nothing. The problem isn’t suffering itself, but to suffer without a point.

My better utopia is an imperfect utopia, one with space to sin and seek redemption, one with ups, downs, and conflict—nonviolent, but high-stakes. I don’t want a world without flaws, but I do want a world without waste. And if that’s the utopia we keep in mind, all-beautiful and all-meaningful, even this Utopiaphobe could believe in an ideal.