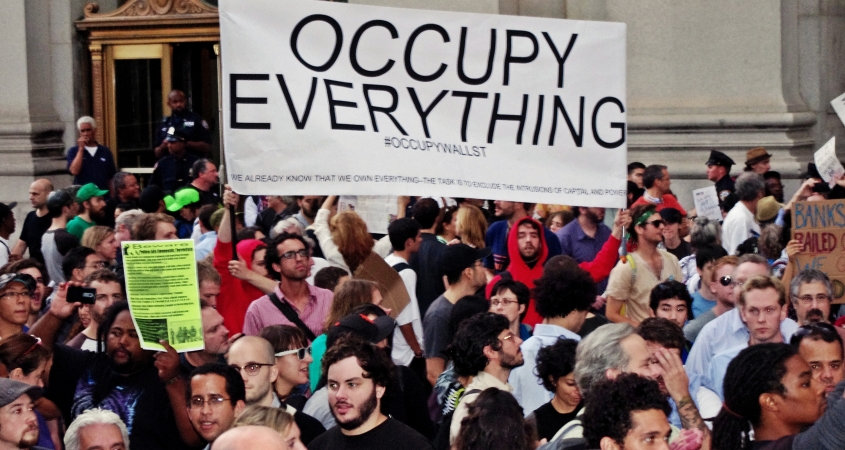 THERE WAS probably a time in your life, not too long ago, when “socialism” was a dirty word. For some of you, it never was—but for most of us, children of the children of Reagan, it was the symbol of unspeakable evil. So unspeakable that, come to think of it, we never really knew what “socialism” meant.

Our first memories are of the end of history’s end, the floundering of the invasion that other generations cheered. We watched the free world sell its democratic soul for a monopoly on foreign oil; we watched an idiot in the White House kill thousands of Americans and thousands more Iraqis in the name (what else?) of empire. Then came, as Iraq began to fade, our political awakening: the first memories that made us think—for us, a moment that came in 2008 instead of 2001. Your parents lost their jobs. Your best friend lost his childhood home. It was all on sale, but you still couldn’t afford it.

After everything fell apart, we hallucinated along with the rest of the country that maybe if we believed, if we could bring ourselves to say “hope and change” with no reason for the former and no prospect of the latter: maybe, if we did all that, we would be proven wrong. Our doubts would be silenced. Obama’s America, if we could forget what came before, would be the America we were promised. Under new management, the system just might work.

The myth of American progress died on November 8, 2016. There were protests, campaigns, postmortems—all directed at Donald Trump instead of the forces that made him. When something went wrong, as it often did, we pointed first to Washington. But between Election Day and 2019, millions realized that something had always been wrong. The problems we associated with Donald Trump were the problems we should associate with history itself. The cartoonish amorality of the Oval Office had been the affliction of plutocrats for hundreds of years.

The lies they told the last three generations were simple (Watergate, Iran-Contra, nukes in the sand) but our generation was told lies of greater subtlety and greater consequence. We learned the following: that the fight for civil rights had ended, that trade would enrich instead of impoverish, that tax cuts were worth Medicaid cuts, that “clean” coal was compatible with fixing the climate, that—with hard work and grit—we would all be better off than our parents. None of this proved to be true; our story became the story of downward mobility.

But the suffering and the disappointment gave us clarity of purpose. We began to understand that our pain was universal, and we saw that many were in greater pain than our own. The richest society on Earth treats poverty as the inevitable product of its wealth, but we realized that our wealth is the answer to our poverty. For the leftists of Generation Z, the eradication of material suffering is more than the great moral struggle of our time. It is the one struggle to be won before attention is turned to any other.

Now that we know, now that we have no excuses, each of us must make a choice. There is no in-between. You can choose to work for McKinsey or Goldman—to repeat 2008, but on Wall Street’s other side—or you can choose to do the right thing. The Sphere has already made its choice. And as long as I am Editor-in-Chief, our mission will be to help you to make yours.