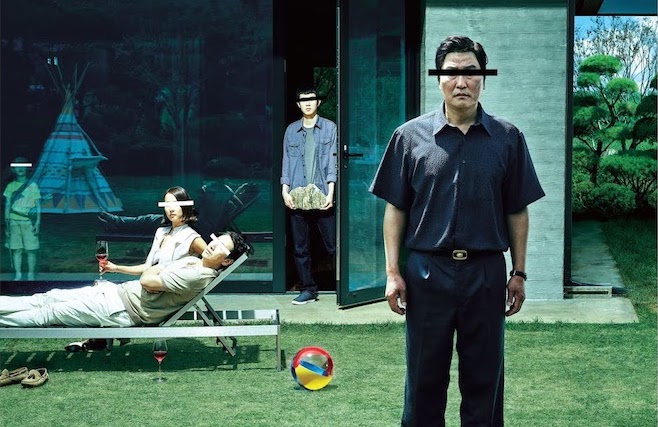 AS AN INTERNATIONAL student from Korea, I had an extremely uncanny experience watching Bong Joon-ho’s award winning film Parasite (2019). Set in Seoul, South Korea, the film begins by depicting the daily struggles of the Kims, a low-income family that lives in basement apartments. Ki-woo, the college-aged son of the family, lands the opportunity to tutor a student from the affluent Park family. One by one, all of the Kims find cunning ways to get employed by the Parks and test the limits of how much the rich family can be exploited. Built-up tension and pressure to keep the fraud hidden culminate in an ending that captures the quintessence of class warfare.

The film’s portrayal of the rich is chilling because it avoids the fictitious, caricatural tropes that the Korean media associate with the wealthy. The wealthy families portrayed in most K-dramas are traditional, entrenched chaebols (conglomerates). They spend their pastime on lavish hobbies that are unimaginable to the middle class. A lot of them are portrayed as heartless people who treat service workers as replaceable inferiors, even lying and killing out of greed. We find out that Park, on the other hand, is a CEO of a fast-growing tech company, and there are many signs that he is Westernized, cosmopolitan, and principled. We see the Parks eat instant noodles or go camping like the average Joe. They are relatable and considered kind by many measures.

But even though the Parks deviate from the media stereotypes associated with the rich, Parasite is far from a nod to the Korean Dream. If anything, it is a reminder that status is a positive feedback loop in a society like Korea: there are clues hinting at CEO Park’s affluent background even before his tech success. For one, he had the opportunity to study abroad, which requires a significant amount of material and social capital. Meanwhile, the film suggests that their poor counterpart won’t be able to escape the cycle of poverty. In the end, we see Ki-woo vowing to become successful as the new breadwinner of the Kim family. But the audience is left knowing that this is pretty much impossible. To picture Ki-woo, now a degree-less young adult in a single-parent household reaching those heights of success, we need to envision a radically different political economy.

Parasite delivers a disturbing message about class that should make every elite liberal uneasy. While it’s simple to dismiss and dissociate oneself from the clichés of evil wealthy people, Parasite is more threatening because it implicates hard-working, nice people in the problem. The film reveals that the semblance of niceness of the wealthy masks a rigged system that is sustained by internally reproducing and recycling social and cultural capital. And a critical way in which wealthy Koreans manage the intergenerational transfer of status is by sending their children to study abroad in institutions with significant brand value.

It is no coincidence that Parasite struck a global chord despite being a Korean-language film. The construction and maintenance of cultural hegemony happens both within and between states. The products of elite rule in one place can help fortify elite rule in other liberal capitalist societies. Case in point: US higher education institutions like Stanford are complicit in the atrocities of the class divide shown in Parasite. They play a remarkable role in consolidating an enduring class of aristocrats in Korea by rewarding the children of entrenched Korean elites with the key to intergenerational wealth.

The vast majority of Korean international students at US universities are from the same homogeneous elite circles. Almost all of them live in Seoul—and usually in the same neighborhoods. Unless they went to elite high schools abroad, they are probably from one of six or so schools in Korea. Chances are, a lot of us went to the same middle schools—or even the same kindergartens. Our parents are potentially business partners and college friends.

While applying to a school like Stanford can be daunting for most international students, it is a readily available opportunity for the wealthy. Many generations of Korean elites have paved the way to prestigious US institutions of higher education. SAT prep institutes and Youhakwons (overseas education consultants) are a common sight in select neighborhoods of Seoul.

But why, then, are foreign degrees so coveted by Korea’s wealthy?

First, South Korea has a long history of academic factionalism. Compared to most Western societies, Koreans easily accept that socioeconomic status should be proportional to academic prowess, which in turn is measured by the prestige of your college. It is hard to think of notable Korean figures who didn’t graduate from college, or who received degrees from lesser-known schools. Where one attended college determines one’s salary and status even far down the road. And this is considered fair and good.

This assessment makes some sense in Korea, where the college admissions process is kind of meritocratic in its own way. Korean high school graduates take an extremely standardized college entrance exam for which results do not coincide with class lines. Despite the wealthy having greater access to top public schools, private tutors, and cram schools, the prevalence of online lectures and resources has helped level the playing field. And unlike the American admissions process, which values legacy status and class-dependent extracurricular activities, it is harder to short-circuit Suneong, which is standardized and strictly multiple-choice. This is especially true given Korea’s recent crackdown on backdoor college admissions by elites. After a series of nation-shaking political scandals, Korea developed an extreme phobia of any sign of unequal educational opportunity. However, there is a gigantic loophole that has been used by elites for years: earning degrees from Western institutions.

From the Korean elite’s perspective, pursuing a degree abroad is often the safer, higher-value deal. Suneong can be ruthless even to the elites who have plenty to spend on boosting their chances. A few wrong answers on the standardized test—which is taken only once a year—can land a student in a less than top-tier school. And given Korea’s academic factionalism, this presents a real threat to maintaining elite status. Meanwhile, if elites pay exorbitant sums of money to consulting firms that specialize in getting Korean students into US colleges, these firms can build a student’s resume and write her applications. The emphasis on holistic assessment by American schools makes it possible for Korean elites to translate material and cultural capital into college admissions results. At the same time, the Korean elites also benefit from elite US institutions carrying the same or a bigger brand value than the top Korean institutions. In short, the merging of US college admissions with the Korean structure of prestige amounts to the perfect recipe for elites to secure wealth for another generation.

While people have differing views on what a just economic system looks like, most agree that it takes equal educational opportunity at least. Even if you are born poor and unlucky, you should have a chance to receive a top quality education. Equal educational opportunity is extremely important for social mobility, for it is often the only way to break the vicious cycle of poverty. But when the education system mirrors socioeconomic inequalities to a great degree, we get a rigid class system where the rich are only getting richer and the poor remain poor.

In Parasite, Ki-woo enters the Parks’ marble-floored house by pretending to be a student of a top Korean college. His fictitious degree gives him a glimpse into the world of the rich, and no other questions are asked about his socioeconomic background. If it exists, the Korean Dream is social mobility through higher education.

But preserving the dream comes at a high cost. The pressure to excel academically has led to one of the world’s highest suicide rates among students, the ruthless standardization of college admissions has resulted in rote memorization replacing real education, and half of Korean politics is basically an ugly partisan battle over which politician’s children violated the strict standards of equal educational opportunity. Ultimately, however, the wealthy do have the means to escape the draconian rules of the meritocracy game. They do so by sending their children abroad, where public scrutiny and the norms of fair college admissions are much weaker.

The Korean meritocracy is hellish for those who have to go through it, and easy to circumvent for the elites. Perhaps it is time that Korea part ways with its deep belief that degrees are the best proxy for smartness and merit.