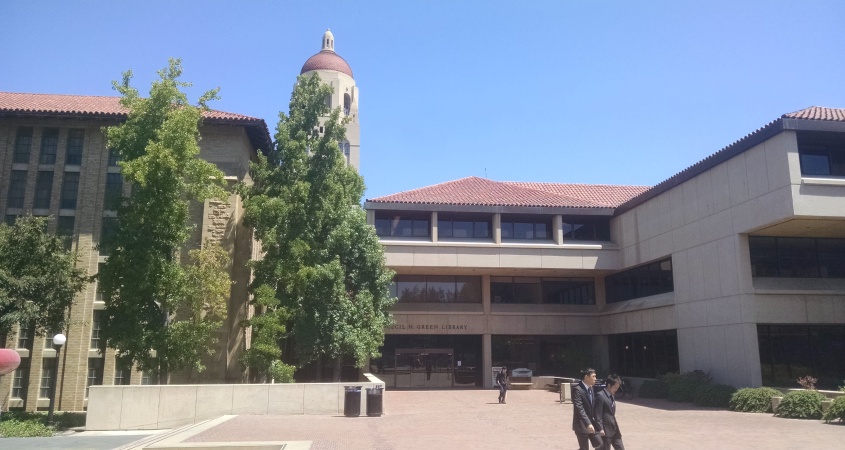 THE STUDENT who sets out to explore West Campus will quickly stumble upon the shiny new buildings with ceiling windows and delicious cafes — the centers for research in such glamorous subjects as neuroscience, biology, and bioengineering. Stanford can’t get enough of those: in fact, more and more Stanford Medicine buildings are bound to be “renewed” in the next few years.

Move a bit away from the sciences, though, and the picture looks quite different. Back in 2019, Provost Drell announced that Stanford would stop subsidizing its University Press — a move that failed only thanks to professors’ activism. The King Institute, which publishes MLK’s papers, is housed in a makeshift building and has had to make do with a tight budget. And this year, Stanford Libraries — the backbone of all humanities research in the university — appears to be the new target of the Stanford administration’s disdain for the humanities.

Indeed, there are no plans to expand Green, much less to build a glorious replacement for the East Wing. What little space there existed for the lonely and embattled humanist in this university has already been reduced in the name of flattering a millionaire donor: the First Floor of Green Library is being converted into the misleadingly named “Hohbach Hall” (less “Hall” than “Floor”), a space for a bizarre collection of entrepreneurial portraiture and relics of the American computer industry to be paraded before open-mouthed students.

It is puzzling that Stanford should commit itself to this pact: accept a generous gift in exchange for purging the First Floor of reference books and periodicals. A freshman who wants to practice her French by reading an issue of Le Monde might not even realize that the Library collects recent periodicals. A student of international relations who comes into Green merely to study will no longer have his eye caught by a prominently exhibited issue of Izvestia — and might never be tempted to explore the other floors in search for even more interesting material. No longer will the student who pokes their nose into the reference section marvel at the blue wall formed by all 60 volumes of the Oxford Dictionary of National Biography, each a monument more lasting than silicon.

But “Hohbach Hall” is not the only change in the Library which has startled us this year. The new library hours — closing at 8pm most days, at 5pm on Fridays, and on Saturdays all day long — go a long way in illustrating Stanford’s indifferent attitude toward its humanists. To make this clear, we need only compare these hours with those of peer institutions.

The visitor at Harvard who enters Widener Library’s high-ceiling reading room will not be unceremoniously ejected until the comparatively late hour of 10pm. Now, a difference of two hours may not seem to reflect so poorly upon Stanford — but whoever is forced to decamp from Widener may still walk a few footsteps to the Lamont Undergraduate Library, which a student can access at any hour of the day or night, and find within multiple floors generously stacked with books.

One finds, in the city that never sleeps, a library that never sleeps either. The magnificent limestone building of Butler Library at Columbia is open 24 hours a day. And at Princeton’s Firestone Library — recently renovated from top to bottom — students can stay until 2am and make good use of the indoor café (which, as one of the authors can personally attest, is not to be sniffed at).

Even American University in Washington DC, with an endowment worth only 2.4% of Stanford’s, has a 24-hour library that would put the 24-hour study space in Lathrop to absolute shame. For starters, there are books; and a student who is working there in the middle of the night does not need to go outside to use a single-toilet bathroom in a deserted area of campus.

Even if Stanford had a real 24-hour library, it would still lag far behind many of its peer institutions. At Princeton, Harvard and Yale, each residential college (or “house”) also has a library of its own, stocked with all of the standard academic works which an undergraduate may need. Even in Mather House, the most hideous of all of Harvard’s undergraduate residences, the library is, at least to a visiting Stanford student, a treasure to behold. Imagine the amazement of the Stanford humanist at this experience! Here, one can forget the idea of substantial libraries in dormitories: there is no longer even an undergraduate library here.

Undergraduates are, of course, hardly even the persons most seriously affected by Stanford’s disdain for its libraries. Serious original research in the humanities is also hampered by these absurd conditions. What scientist would ever consent to being denied 24 hour access to their lab? The very idea is laughable.

It is true that Green, as a repository of priceless works, has certain special security concerns; but is the same not true of the many labs on campus, crammed to the ceiling with expensive and eminently stealable equipment, or of labs that traffic in fatal substances, dangerous animals, and fragile experiments?

It is understandable that the matter of keeping Green open later and more often is less one of funds and more one of finding staff willing to work at such hours. And here there are factors beyond Stanford’s control, such as the Bay Area housing crisis, that limit its ability to act.

Such contentions, however, will hardly do. It is obviously important to have proper librarians at the helm of the circulation desk, and to find nocturnal librarians will never be easy. Suppose, however, that the circulation desk were closed at 10pm. Are we really supposed to believe that Green, or at least some part of it, could not be kept open by employing a small 24 hour security staff? Is it possible that here in the heart of Silicon Valley — home of the Googleplex — such arrangements are entirely unavailable?

The hacker-philosopher-capitalist Paul Graham, of all people, writes about how different places emanate different messages to the people who live in them. For Graham, Harvard’s message is that “you should be smarter,” and that “you should get around to reading all those books you’ve been meaning to.” Silicon Valley, meanwhile, tells people that they should “be more powerful,” usually by means of owning a successful startup. He points out that professors in the Bay Area are second class citizens until they start startups.

In essence, “Hohbach Hall” and the new library hours are all about making Silicon Valley’s message even stronger within Stanford. Sure, some people will resist that message: departments like History and English will continue to give excellent teaching and to attract a handful of people. But that will be in spite of university policy. Instead of claiming to promote the humanities, Stanford administrators might as well admit that they would be fine with Stanford becoming a “Caltech of the North” rather than “Harvard of the West.”

We write this article not out of contempt for the Library, but out of love for it, and out of a profound desire to make it better. Some of the most positive Stanford experiences have been at Green. We criticize it not because it is so worthless as to be easily censured, but because it is too valuable for us to tolerate its mishandling by administrators who throw open the war chest for the sciences and treat the humanists with a closed fist.

The availability of books and periodicals is, one must stress, the only redeeming feature of Green’s East Wing. This concrete dungeon of despair, with all of its frayed carpeting, perpetually empty faculty closets, shadow-swallowed corridors, and faded furniture, remains one of the last refuges for the humanist on campus. Some inclined to protest this charge might point to McMurtry: but they would only darken the cloud above the humanist’s head by their misguided conflation of the humanities and the fine arts. McMurtry’s exhibitions will not aid the master of the bibliographical dark arts; Bing Concert Hall will not aid the aspiring historian; and the Roble Arts Gym can do nothing to aid the besieged epigrapher or intrepid explorer of manuscripts.

Green is all there is for these lonely characters, and its East Wing could hardly be more uninspiring or less lofty. Yet in spite of it all, one cannot help but feel a thrilling rush each time one enters the East Wing’s stacks to lay one’s hands upon monographic jewels that seem, against all odds, to glitter darkly under the dim fluorescent lights. But if books continue to be removed after the manner of the recent renovations one can be certain that the bitter experience of visiting the East Wing, with all of its ugliness, and all of the contempt for the humanist that its ugliness seems to embody, will be unadulterated by any trace of sweetness. The sanctum sanctorum will contain no treasures, and the concrete walls of the grotesque temple will be slabs for an empty tomb.